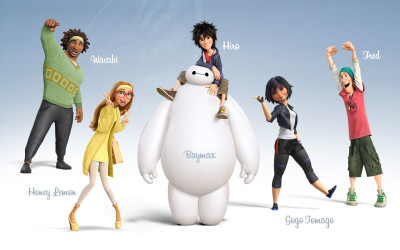 Before Valentines day our class watched a film in English called “Big hero 6”! The main character in the film is a boy Hiro. He has a brother Tadashi who is studying in science laboratories. Both boys live with their aunt Cass.Hiro made a robot and his name was Megabot. The boy is going to robot fights and usually wins because the Megabot is made from special material created by Hiro. The robot is controlled by thoughts but you have to have a special ribbon on the head to control it.One day Hiro’s brother takes Hiro to his lab and introduces to his friends: Go Go Tomago, Honey Lemon, Fred and Wasabi. Then Hiro sees the robot made by his brother for the first time. Robot’s

name is Beymax and he is created to care for people.After some time Hiro’s brother dies in the laboratory in a fire. Tadashi tries to help one of his professors but is not able to save him and he dies.Hiro is so upset that he forgets the Beymax. One day Hiro sees Beymax in his brother’s room. Beiymax is a smart robot and he can talk to people. Hiro teaches Beymax to fight. One time Hiro finds out that someone steals his megabots idea.

And then Hiro, Beymax and Tadashi’s friends start to look for a thief. The thief appears to be a professor for whom Tadashi sacrificed his life.
The professor has a daughter who tried out a mechanism made by another professor.That mechanism could transfer a person from one place to another. But the transfer is unsuccessful

You have to watch this film!