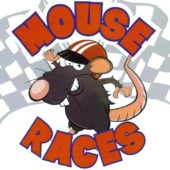 it looked like they were racing. So he thought – “I want to have a mouse race!”

He started planning the rules. He called one of his friends and asked for help making the rules and he accepted it as a joke. Two days later they finished the rules:

2 weeks later they organized the event. A lot of people came to watch but not many to compete. Later people started to come more and more and just like that it became a beautiful