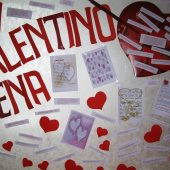 Valentine’s Day is
celebrated on February 14. It’s a day of love; people usually give presents for
the people they love. It is a day to show how much you love others.

People give flowers, usually red roses to
their friends, loves. Sometimes cute little or big toys are gifted. Then, of
course, there is chocolate, which is gifted in beautiful, heart’s shape’s
boxes. And let us not forget postcards, which are very
important to this celebration. I think we can find postcards on every
celebration, because sometimes it’s easier to say what you think on a paper.
It’s even more beautiful if the postcards are made by ourselves. It’s nice to
free your imagination and do everything what is beautiful.

It is believed that St.
Valentine was the bishop of Rome, who lived in the third century. By that time emperor
Claudius II had made an order that hadn’t let people get married, because he
thought that not married men are better warriors. The bishop saw how people
were suffering, so he married the couples secretly. When the emperor found out
what Valentine was doing, he put him in to the prison and on the 14 of February
it was decided to make a death penalty for Valentine. After some time Valentine
was called St. Valentine for his good works, for loving the God and making
people happy.

Roman’s god’s of love – Venus’s most lovable flower
was a red rose.

In Middle Ages girls,
on Valentine’s Day ate unusual food, because they thought that this will help
them to dream future love.

Some pet owners about 3 % give presents on Valentine’s
Day to their pets.

About 1 billion Valentine’s Day’s cards are exchanged every year.

Symbol ‘X’ means kiss. It is thought that this symbol was found in Middle Ages, when people, who couldn’t write their own names, put ‘x’ after their witness. To show their sincerity they kissed that sign.

In nineteenth century, doctors usually suggested to
eat chocolate to distressed people who lost their loves.

Last year, when we came to school, a half heart, which was made of

paper, with a number on it was given to us and we needed to find the other half. If we did that, we would go with our found person to the table, on which there were a lot of biscuits. And then we were given a biscuit and we could eat it and it was very delicious. Of course it was hard to find a person, who had the same number, but we made it. It was a lot of fun and it is a way to meet new people.

Have
a beautiful Valentine’s Day!