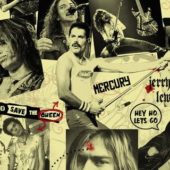 A music genre is a category that defines the piece of music. A well known fact is that there are a lot of music genres and that even now, new forms of music are invented. In this world pop music is the most popular genre that is why it has a lot of influence to our generation. I want to talk about another genre of music which changed a lot of people too and keeps us inspired till this day. I will talk about my favorite type of music – rock. Firstly, I have to mention that Rock music originated in the 1950s in the United States of America and was mostly known as “Rock and Roll”. “Rock and Roll” was made famous by the music king himself Elvis Presley. There is a lot of debate on who inspired this genre to appear but, all in all, it has its roots in 1940s’ and 1950s’ and was heavily influenced by blues, rhythm and blues and country music.

The main part of rock music is the guitar. To be specific it is an electric 6 string guitar which is easily heard in a rock song. Of course there are other instruments like drums and a 4 string electric bass guitar. In the 1960s when the original rock was starting to get famous these were the only instruments that were present in this type of genre. Nowadays there are digital electric devices that accompany a rock song or/and other instruments sometimes are present which do not look like they would fit in this context. For example, a famous Finnish band Apocalyptica uses cello as their main instrument in metal songs, which is a rock sub genre.

Talking about sub genres of rock it is clear that there are a lot of them. 1960s is sometimes referred as the “golden time” of sub genres for rock. Blues rock, folk rock, country rock, raga rock, and jazz-rock were some of the hybrids that emerged at that time. Also, these sub genres contributed to the development of psychedelic rock and the psychedelic scene. There is a need to mention that new genres that emerged from this scene includedprogressive rock, which extended the artistic elements;glam rock, which highlighted showmanship and visual style; and heavy metal, which emphasized volume, power, and speed. Then at 1970s punk rock emerged, which wanted to break the rules of all of these sub genres and at 1980s it made alternative rock, new wave and post-punk appear. For me 1990s is my favourite decade of music. At that time some genres introduced them selves to rock like Brit pop, indie rock, pop punk, rap rock and rap metal and some of the new types of music appeared like grunge, garage rock and etc.

The context of in this type of music changed through the decade. A rock song usually has a verse-chorus form in which love is in the center but through the years it has made some political or social problems to be heard. Also it is great that rock music is beginning to be credited for its lyrical side. This year Bob Dylan a famous American songwriter, singer, artist and writer was given a Nobel Prize in Literature for having created new poetic expressions within the great American song tradition.

All in all, rock is a great genre that keeps us inspired, motivated or sometimes even sad. It is a great joy that I and people of the world can experience it and hear it. Rock is diverse and interesting that is why i like it.