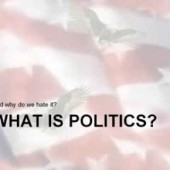 “Frankly speaking, I don’t hate politics. However, if I said that I was interested in politics, I would be lying as well. Just because I personally don’t follow the latest news about politics or know much about the political systems and affairs between various countries doesn’t mean that I despise politics. Just like many young people nowadays, I don’t take part in political activities as well as don’t really have much knowledge concerning politics since it seems something that only serious elderly people can be involved in. To me, politics is like an empty house – barren and boring. But you are still surrounded by it, you cannot live without it. And when you look at this “empty house” up close, you realize how much work has been put into building and maintaining it; you realize that it is something rather complex when you start looking at all its crevices and cracks. Hence, you cannot run away from politics, even though, it might not be of any interest to you at all. Every person is a part of his/her country’s political system, whether they like it or not. That’s why I cannot claim that I hate politics – something that controls so many aspects of my life.” Laura Baniulytė, LEU 2nd year student of English philology

“To be honest, I found the statement ‘to hate politics’ rather extreme expressing my individual concern about political issues. In terms of my own beliefs, it would more accurate to state that ‘I don’t really hate politics, while the rest of the world really prompts me to do it’. Literally speaking, thousands of Lithuanians share either limited or fixed knowledge on the fact that approximately two-thirds of the people being in charge of governmental issues are kind of liars, corrupt people or the ones who will never deliver their promises. I cannot agree more, it is normal hate the ones who cheat and disappoint you all the time. However, the other side of this approach could be assumed as a typical human tendency to hate those who are in power and can take actions on others. It is easy to hate the ones, we disagree with, isn’t it? To that end, it is crucial to understand the reasons why are we constantly arguing about politics. Since, otherwise such ‘displeasure’ with political issues could be deemed as either a stereotypical thinking or an old habit against people who are in power. Thus, broadly speaking, these statements mostly lead to my own perception that I don’t really hate politics. I am aware of the fact that politicians are normally surrounded by affairs and tricky situations making them the worst and cynical people in the world. However, despite this, I’m trying to think critically all the time. In other words, I support convincing ideas which not only look nice to me, but also fit my own beliefs. Hence, I find myself being interested and keen on politics quite often. Besides, I consider such interest as rather useful and compulsory. Thus, such perception leads me to rethink the fact that we have no right to judge and criticize the final product if we were not involved in the process. Therefore, to my way of thinking, I can draw a conclusion that we shouldn’t try to escape from the things which affect our lives significantly or neither hate it, but start caring them from the very beginning.”  Miglė Grašytė, second year student of English philology.

“Why I hate politics? First of all, I couldn’t say that I hate politics. In contrary, I could even say that I am interested in politics and I am eager to know what it is and how it works not only in our country but all over the world. For some this word may sound as a very boring, complex and frustration arousing topic where everything is very complicated and monotonic. And I do understand this opinion, because politics include a lot of fields where you have to have a good knowledge of law, history, economics and  a basic understanding how to rule the country so that it could prosper. However, you can’t have it without reading a lot of academic books, political articles or law acts. And that, in my opinion, deters why majority of the citizens are taking no interest into politics. On the other hand, there are a lot of good reasons why everyone, like me, should be interested in politics. You can learn not only a lot of interesting political and historical facts but also how to speak publicly, how to solve different problems, how to defend or obtrude your opinion and a lot more. Knowing your rights and duties or what your government decides to approve gives you not only a huge power to control your representatives in the parliament but it also makes you a ruminative and responsible citizen who cares not only about his future, but as well about his children’s future. That’s why nor me, nor you should hate politics.”Gabrielius Bružas second year student of English philology.

“I hate politics because a lot of politicians care more about their own wallet and acquiring power than about being sincere and reliable to the people who gave them the chance to sit in politician’s chair – to their own nation. The fact that most of the politicians are hypocrites is easily noticeable in every election. Generally, people who candidate for the position in the government would say anything to get that job. Every time the new elections come tons of guarantees for better life are seen. Some promise to lower the taxes, some promise to raise the wages and so on. The promises are always very beautiful but changes rarely come to life. The promises are mainly focused on the working class and the elderly because these people generally yearn for the changes so much that are willing to close their eyes and give their vote for the politician that promises the most. Obviously there are some sincere politicians but they are rarely elected because they do not build air castles of fake promises and appear less grandiose. Therefore, I hate politics because the people who were chosen by the nation are rarely those who truly care about their country and deserve trust.”Gintarė Ragauskaitė.
“Answering this question, I would like to say that I do not hate politics. On the contrary, I like it. The first reason why is because politics is very interesting. It is interesting because of politicians’ made decisions, relationships, strategies, which are important to the society because they directly determine people’s lives and living conditions in a particular country. The second reason why I am interested in politics is the knowledge I acquire and the experience I gain. I learn a lot about countries all over the world. I find out a lot about different spheres such as economics, legislature, government’s work, relations. Also, I learn a lot about countries’ political background, history and compliance of traditions and convictions. To sum up, the politics is a really interesting and important sphere for every person. I hope, that in the future we will have more people all over the world, who will be interested in politics. “
Regards,
Austėja Maskoliūnaitė

“To tell the truth, I could not say if I like or hate politics. Day after day, meeting different people, hearing their opinions, it made me to take a dim view of politics. It seems that there are a lot of ”cloudy” and ”hidden” corners of it. In fact, everything in this sphere looks easily bought and sold. What I am mean by saying it, is politicians aspiration to improve their own welfare. If we could analyze politicians promises in terms of percentage, I am really afraid that we would find a huge gap between what was said before election and what was done after election. I guess some people just make promises to buy more votes, so I am not going to believe it until I see it. In other words, until words turns into results. As far as drawbacks of politics are concerned, last headlines of website articles, TV news, newspapers are constantly full of tragic events, higher and higher emigration numbers, corruption and so on and so forth. Maybe these painful topics of our everyday life are bright red signals that something is not right, something more has to be done by our politicians, something more than just words. Not to go deeper, I do not have enough competence in politics to say that I hate it, but I know enough to mistrust it. And as a young citizen I am deeply concerned about the day after today.” II year student of English Philology