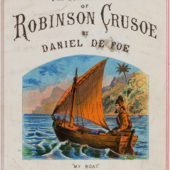 Robinson was born in 1632 in England. His father was German, but he came to live in England. After that Robinson’s father married his mother. Her family name was Robinson so they called their son Robinson.

His father was doing well in life and Robinson went to a good school. He wanted Robinson to have a quiet and good life. But Robinson didn’t want that, he wanted to have an exciting life.

Robinson wanted to be a sailor, but his parents weren’t happy about this. 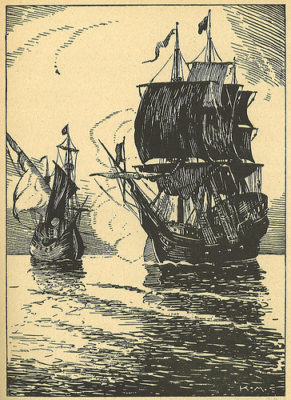 They said that sailing was hard and dangerous. And because Robinson loves them, he tried to forget about the sea.

But he couldn’t forget so he met a friend in town whose father had a ship. His friend asked if Robinson wanted to sail to London. And so the next day they sailed to London.

After arriving at London, he stayed there for some time, but he still wanted more adventure. So when the captain of a ship asked him to go to Africa with him, Robinson agreed.

Everything was well until a pirate ship attacked them. After a long fight they became prisoners. The pirates wanted to sell them as slaves, but the captain wanted to keep Robinson with him. And Robinson became a slave and the pirate’s captain was his master.


Summary – Chapter 2 “Down the coast of Africa”


For two years Robinson lived the life of slave. He was working but he wanted to escape from the captain of the Turkish pirates.Robinson’s master liked to go fishing

by boat and always took Robinson, a man called Moely and a young boy Xury with him.One day the master commanded Robinson, Moely and Xury to catch some fish and Crusoe knew that it was a great chance to escape.When they were in the boat, Robinson knocked Moely into the water and shouted to him to go to the shore.Robinson and the boy wanted to go to the Canary Islands but they were afraid to go too far from the shore so they sailed down the coast of Africa.One day they saw some strange people on the shore and asked them for some food and water. The people gave them what they wanted and Crusoe shot a leopard for them. Friends sailed again. Suddenly, Xury saw a ship and they started to shout and shoot with their guns and finally they both were on the ship which belonged to the Portuguese captain. He said that he was going to Brazil and Crusoe could go with him.In Brazil Robinson said goodbye to the captain and Xury and went to begin a new life.


Summary – Chapter 3 “The Storm and the Shipwreck”

He stayed in Brazil for and worked really hard. He got rich and his life was going well. One day his friends came up to him and invited to go to the sea again. Robinson had a comfortable life but he still agreed.
In 1659 he went 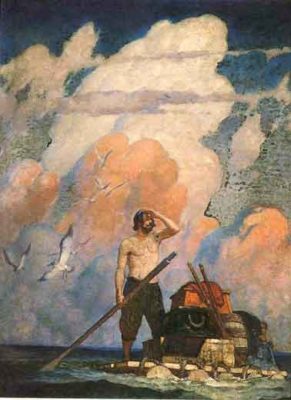 to the sea again. They were swimming and everything was nice, but later the water was really rough. Their ship crashed and Robinson was the only one alive. Alive but in a very dangerous island. He didn’t have food and other supplies. Then he decided to sleep. He went up a tree and slept there. It was safer in the tree.
By Lėja

When the day has come, the sea was quiet. Robinson looked for a ship and he saw it. He decided to swim to it. When he was on the ship he didn‘t know how to get on it. Then he saw a hole and he climbed through it. There were a lot of useful things on board: food and tools. Robinson was hungry, so he started to eat. Later he decided to take some of the tools and made a little boat, then he took some of the goods and came back to the shore. Robinson decided 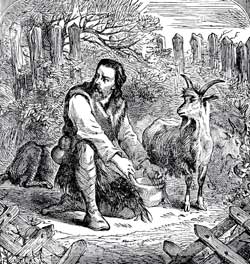 to make a house for himself on one of the hills. He felt unhappy because he knew that he was alone on the island. After a lot of hard work Robinson had a very fine tent. The back end of the tent was a good place to keep his food, so he decided to call it a kitchen. That night he slept in his new home. The next day Robinson thought about dangers, so he decided to build a very strong fence. After work his fence was strong as a stone wall. When he finished all the chores he saw that he needed more tools, so he swam back and forth to the ship twelve more times. But after his twelfth time there was a terrible storm and he could not see the ship. Robinson thought that he was lucky, because he was alive and his friends were dead. Also he said to himself that he was going to be on this island for a long time. So he cut these words on a long piece of wood: I CAME HERE ON 30TH SEPTEMBER 1659. After that he decided to make a cut for each day.


First of all, he wanted to make his cave bigger so he carried out stone from the cave and made it. Then he needed a table, a chair and a place to keep his food, guns and tools there. He couldn’t do anything at night because he had no light, but then he learned how to do it. After ten months he visited other parts of the island. Then he began to dry food in the sun and he found a greener, nicer place to live. Also he saw that his house was on the worst part of the island. Then he learned to make pots to keep 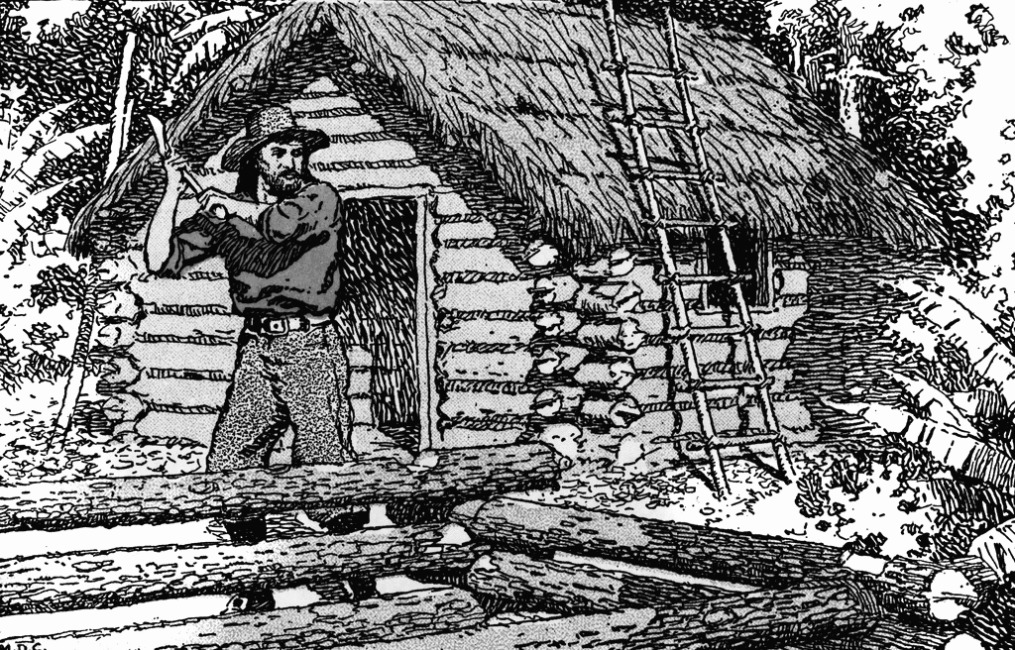 his food there, and it was a hard work. He began to cook bread. After six months, he had a very small field of corn. Then he decided to go to the other islands nearby, so he made a boat, but it was too heavy. After two years he made another boat but it was too small. So after two more years he got to the other island and built his second house there. Then, he made some clothes, he found some goats on the island and kept them in a field with fences.

One day Robinson saw a footprint – the footprint of a man. Robinson was afraid. He thought that this man is one of those wild man who killed and ate other men. Robinson looked everywhere, but there was nobody. That night he couldn’t sleep. The next day Robinson got all his guns ready and he put more wood and young trees around his house. Nobody could see Robinson now. For two years Robinson was afraid. He stayed near his house 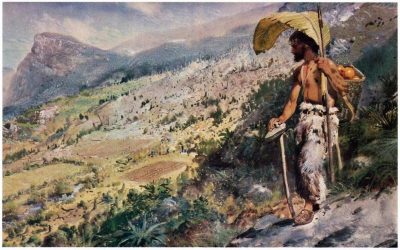 and never used guns. Later he built the third house. It was a very secret place. One day later Robinson saw heads, arms, feet and other body parts of men everywhere. Robinson came home. For many months he watched carefully for the smoke, but he didn’t see anything. Then one morning in his twenty-third year on the island, Robinson saw a smoke from a fire. There were nine men around the fire, and they were cooking their terrible food – humans. Then these wild men danced round the fire, singing and shouting. After two hours the men got onto their boats.


For two years Robinson never went anywhere without his gun. He was afraid. One night he heard sound of a gun in the sea, so he sailed there with his little boat.

He found some clothes, tools and a box of Spanish gold and silver money. He was rich but he couldn’t do anything with his money, he needed friend not money.

Robinson really wanted to escape from the island so he decided to took prisoner of wild men. Once the prisoner of the wild men turned and ran. Robinson had to kill two 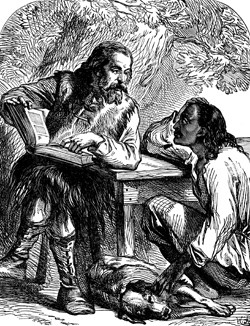 wild men to safe prisoner. He took men to his secret cave, gave him food, clothes.

Robinson decided to name him Friday because he first saw him on Friday. Robinson began to teach him to speak English, he was quick learner so he fast learned a lot of things.

One time they were on top of the highest hill and they saw the island where Friday used to live. So Robinson and Friday started thinking about escaping island.

They worked hard and after month the boat was finished. They were ready for long journey.


Summary – Chapter 8 Escape from the island

Robinson was on his twenty-seventh year on the island. He and Friday worked hard for food. One evening Friday went out to look for a turtle meat and eggs. He was back after an hour and he was very afraid. He said, that there was a ship, and some men were coming to the shore in a boat. Robinson and Friday ran down to the shore. And they saw an English ship. They hid in the trees. There were eleven men in the boat, but three of them were prisoners. They couldn’t walk, and they sat down under the trees. Quietly, Robinson talked with them. First of all, they were surprised, and Robinson thought, that they were surprised because of his look. But one of the prisoners told, that he was the captain of that ship and another two prisoners was his officers. There was a mutiny and captain and his officers became prisoners. Robinson said, that he would help, if captain would help him get home. Captain agreed. 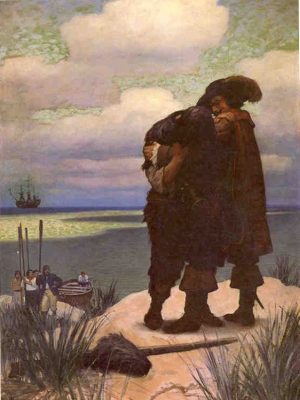 He told, that these men have two guns on a boat. So they made a plan. The seamen were not ready for fight, so that was easy. There was a guy named Tom Smith. All were afraid of him, so some of the men agreed to help Robinson and the others. Then came another boat. All men in that boat had guns, and Robinson with the others waited in the trees. The dark helped to fight, but it was hard anyway. One officer shouted, that the captain had fifty island people to help him. So seamen stopped fighting and gave guns. Three of them agreed to help. Captain and his men went to the ship for a fight. All night there were sound of guns, but the next morning captain was master of a ship again. Finally they got into the ship and left mutineers on the island. Robinson said goodbye to his island and they sailed back to England.

When Robinson came back to England, he felt like a stranger. 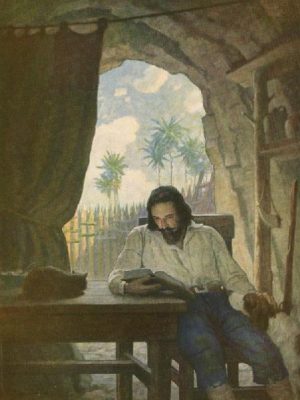 Everything was different. He went home to York, but his parents and two brothers were dead. He found two nephews living with one of his brothers. They were happy to learn that he was alive.

After a month he went back to Lisbon. Crusoe had friends there, who could help him sell his land in Brazil. Friday came with him. He met with the captain, who helped with Robinson’s business. They were crossing between mountains of France and Spain in winter. It was a long trip.It was a long voyage. Friday was afraid of snow. He saw it for the first time.

In England Crusoe found a house and began living a quiet live together with his family. After a while Robinson got married and had three children, one daughter and two sons. Then his wife died. One of his nephews became a captain of a ship, so he asked Robinson if he wanted to have some adventures together. Robinson agreed and in 1694 he went into sea again and had many more adventures.


The book for reading: